skip to main | skip to sidebar

Another Victory.
---
The Plattsburghs Easily Defeat St. Hyacinth on Saturday.

St. Hyacinthe, one of the prettiest and most thriving little cities in the Dominion of Canada, was represented in Plattsburgh Saturday by a ball team that would be a credit to any town. Every man on the team is a gentleman, and although they suffered defeat at the hands of the local team, they showed in many ways that they can put up a stiff game, and will not acknowledge defeat until the last man is out in the ninth inning. But when they run up against an aggregation of players such as compose the Plattsburghs, they are clearly outclassed, and they would have been shut out in Saturday's game but for an error of judgment by Deswan in the eighth inning.
The game opened with the home team at the bat, but they were retired without scoring, which fate befell them in the two following innings. As the visitors met with the same reception it began to look as though the game would be unusually close, but in the fourth inning by timely hitting, assisted by two errors of the visitors, the Plattsburghs had five men cross the plate, which practically won the game.
It was after this inning that the captain of the home team, for some reason best known to himself, relieved Burns, off whose delivery but two safe hits had been made, and substituted Patten, who then went into the box, had excellent control and good curves, striking out six men, and allowing but three hits.
Kidd, who played left field, is one of the best all-around players that has ever donned a Plattsburgh uniform. He made two running catches of fouls which won for him hearty applause, besides making two singles.
Sheldon gives promise of being a valuable man. He covered short in excellent style, and showed his hitting qualities by knocking out a timely two bagger. Butts, at third, played his usual erratic game first making an error, and then redeeming himself with a brilliant stop and throw. For the visitors Smith did the best stick work, having a single and a two-bagger to his credit. The following summary tells the story of the game: 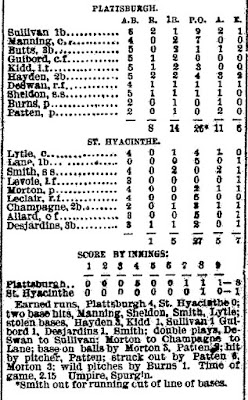 -- Pappaleau, Powers and Sockalexis are expected to arrive and report for duty to-day.
-- The Plattsburghs play Ausables to-day, St. Albans 24th, Malone 26th, and Hull 28th.
-- Phisterer, of the local team, is gradually recovering from his injuries.
-- The game with the Ausables will be called promptly at 2 o'clock to-day.
-- At Malone the home team easily defeated the Farnhams by a score of 8 to 0 Saturday.
Posted by Mark Aubrey at 3:24 PM

The Fourth at Rouses Point
Two smart games of base ball were played in the afternoon.

The Fourth at Schuyler Falls.
An interesting time was had at Schuyler Falls. With public spirited and wide awake men like J. T. Everest, F. Good, C. Turner and others, to "put it through" it could not be other than a success.
In the forenoon there was a game of base ball between the "Star" and the "Pawnee" companies of that town. After a closely contested game of two hours the Stars were victorious, by a count of 18 to 20. S. S. Taylor, Umpire.
Posted by Mark Aubrey at 11:00 AM

An Iowa church has expelled a deacon for attending a base ball match.
Posted by Mark Aubrey at 11:00 AM

Rouses Point --
A game of base ball was played on Saturday last at Alburgh crossing, between the Almonte first nine and a picked nine of Alburgh. The score stood 51 to 14, in favor of Almonte.


The return match of base ball between the Champlain club and the Beverwycks, of this town, was played in this town last Saturday afternoon, the latter defeating the former by 16 to 11. The playing of the home team, both in fielding and batting, was far in excess that with the Norwich University club of Northfield, Vt. The Champlain club, having had two players from Burlington and one from New York, thought they could defeat the Beverwycks, but their expectations were fruitless. The attendance was very small. Dr. Hackett, of Champlain, acted as umpire in the fore part of the game, when McLever, of New York, was disabled by a cut in one of his hands by the ball, who umpired from the beginning of the sixth inning for both clubs until the end of the game. The gate receipts amounted to $8.50, which was divided among the two clubs.
Posted by Mark Aubrey at 11:00 AM

Rouses Point --
The Beverwycks of the place went to Swanton on Monday to play a game of ball. The two clubs do not agree as to the result, Swanton club claims the score to have been 10 and 10, while the Beverycks claim it was 8 and 10 in their favor at the time of leaving off. The Beverwycks were much dissatisfied with the umpire's decisions.

Ellenburgh Centre --
The base ball clubs joined Saturday. Chateaugay beat the Centre. The Lake club looked very nice in their suits.
Posted by Mark Aubrey at 11:00 AM

The first game of base ball here this season was played on the Fair Ground, on Tuesday afternoon, between the Champlains of Bluff Point and the Beverwycks of Rouses Point, the former winning first blood for the musical, fun-making nine of the sunny South. The score was even at the end of the eighth innings, when the colored gentlemen humped themselves and jumped upon the Circassians, knocking them all over the field, and scoring eleven runs against a cipher, leaving the total score of 21 to 10. Look out for the return battle.
Posted by Mark Aubrey at 2:21 PM

--The ball game at Rouses Point between the Keesevilles and Beverwycks, resulted in a score of 2 to 1 in favor of the latter. A return game will be played at Keeseville next Monday, June 29th.

--The fine game of base ball played, Saturday afternoon, on the parade grounds, between the Plattsburghs and the Starlights, was won by the latter by a score of 3 to 1. Umpires, Hon. Geo. S. Weed and Dr. C. C. Schuyler.

--In the game between cigar makers and the printers, Saturday afternoon, the umpire decided in favor of the latter by a score of 9 to 0.

--The Cuban Giants will cross bats with the Ticonderoga base ball team, Wednesday, June 21.
Posted by Mark Aubrey at 11:01 AM

--The Cuban Giants will cross bats with the Ticonderoga base ball team, Wednesday, June 21.
Posted by Mark Aubrey at 11:00 AM

--The Cuban Giants defeated Rutland Friday by a score of 10 to 1.

--The Plattsburghs were defeated at St. Albans Saturday in a thirteen-inning game by a score of 11 to 10. The game was won and lost in the first inning when the Vermonters score four runs on errors.

--The Burlingtons defeated Barre at the latter place on Friday by a score of 6 to 4. Lovett was in the box for the visitors and Austin for the home team. Eight Hits were secured off each. Burlington won on Dinsmore's home run in the third.

--The Plattsburghs were victorious in the game Wednesday with the Burlingtons at Burlington. The score was 5 to 4.

--Plattsburghs vs. Burlington this afternoon at 3.15.

--Plattsburgh lost to Barre yesterday, 12 to 7, and St. Albans to Burlington, 8 to 5. These results produce queer effects in the percentage table. Barre, which was tied with Burlington for second, now ties Plattsburgh for first. Burlington does not fare as well, having played one more game than Plattsburgh and lost one more, with the games won the same.
Posted by Mark Aubrey at 11:00 AM

--The ball game on the parade grounds Wednesday, between the Stars and Hotel Champlains, resulted in a victory for the latter by a score of 8 to 4.
Posted by Mark Aubrey at 11:00 AM